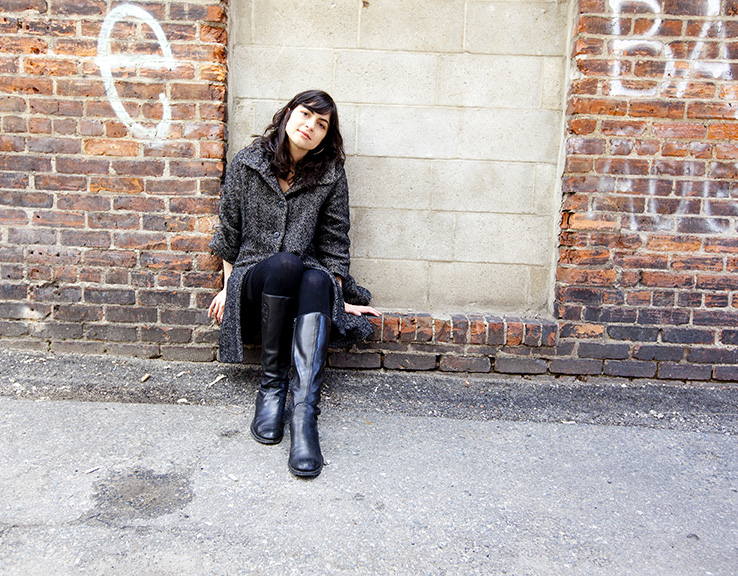 Oftentimes how a story came to a writer is just as interesting as the story itself. In the spirit of our often-mysterious inspiration, where did the idea for The Sweet Relief of Missing Children come from?
Inspiration came from lots of places: Jim Goldberg’s photographs of child runaways; a conversation I overheard about a family who perished at a train crossing; an image from LIFE magazine of a gorgeously disheveled girl standing barefoot on the street in New York City in 1969. (This hung over my desk as I was writing.) All of these were important. But the most important inspiration? Law & Order. Csi. Gone Baby Gone. Natalie Halloway. By which I mean the ever-present depiction of missing/dead girls in art and media. I think I felt compelled to really enter the mind of a child in a moment of extreme crisis. A girl on the brink of horror. I wanted to fully render her consciousness—to document an exacting, complicated experience of the child’s (perhaps split) consciousness. I wanted to find both pain and grace, even relief, within her.
In the novel, a child named Leonora is abducted. In the first chapter, the reader learns that she’ll disappear, though her fate’s not revealed until the end. The book intermittently visits her point of view: we are with her during her decision to «help» a couple on the street who ask for directions; we are with her during her capture, her containment in the backseat of a car, and, later, in a basement rec-room, as she waits, wondering what will happen to her, and experiences a sudden revelation.
It was painful to write these scenes (which, I should say, constitute a small part of the novel). It was difficult to stay so close to the terror of a character I loved. But I felt I had to—I felt compelled to write these scenes in careful, close, patient detail. By and large, we hear about lots of missing girls, but it seems to me we seldom see a complex depiction of their consciousness.
Missing, brutalized, and dead girls are everywhere: on network TV, in endless movies, in an abundance of novels in which the child is a helpless victim, a springboard for plot. A missing girl is usually a mechanism by which a man can prove his worth by saving her.
On crime shows, hard-boiled murder investigators scrutinize pretty, half-naked corpses. And we watch with extreme sustained attention (notable in this ADHD-inflected culture) real-life stories about girls like JonBenet Ramsey and Elizabeth Smart.
So I wondered: what art has been willing to access the consciousness of the missing girl at the precise moment of threat and horror? Threatened girls are everywhere in the media, but I felt like I hadn’t seen a movie or read a book that bore full witness to her subjectivity—that even granted her a subjectivity. So I set out to write a story about a girl who, despite terrible circumstances, finds her own brand of transcendence.

I found it interesting that you wanted to write a child’s point of view about being abducted/missing, but, like you said, it actually turns out to be a very small part of the novel. The rest comprises other characters who are «missing,» but in a different way—they may have been separated from their childhood or physical homes, but it is a decision that they make on their own, unlike Leonora. How did the marriage of these two concepts of «missing» come about? Did you begin writing about Leonora but found your thoughts invaded by these other «lost» characters? Who were the first and last characters?
Yes, Leonora’s story is a small part of the novel, and yet hers was the story that most rattled my imagination, and so fueled the writing of the book. I first saw Leonora through another character’s eyes. Pax has run away, has «abducted» himself from a impoverished life and struggling mother. He changed his name, got on a bus, and took off. No one, to his knowledge anyway, ever looked for him. When he arrived in New York City and saw Leonora’s face on missing-person posters, he became fascinated. Like her, he was missing, but no one was searching for him. He was unwanted. But despite an absence of love, being missing was a form of possibility for Pax. His life could happen anywhere; he had no obligation to anyone; he found an ecstatic freedom. Meanwhile, Leonora’s loved ones publicly demonstrate their love, concern for her is everywhere, and yet her absence is empty of possibility, of future. Once I became aware of this tension, I wanted to explore other versions of going missing. One character is abducted. One character flees to escape trauma. One character cannot escape, longs to escape, and so finds a way to reproduce the experience of being «missing» though illicit sex. One character resists running away until a moment when her familial duties have been fulfilled. It began with Pax, and, from there, I tried to depict other kinds of (self) abduction. But I certainly didn’t sit down to write about abduction and escape. These themes emerged slowly, over time. In my experience, books teach us what they’re about, and not the other way around.

I like the idea of these slightly overlapping vignettes, told of different characters over different decades. The structure reminded me of the ocean, with waves crashing in and receding, all one murky sea, which in the end dispels Leonora gleaming, a discarded shell, on the sand, for the reader to take home and mull over. How does a writer begin to address so many decades and characters, weaving them together just enough while leaving threads for the reader to speculate about in the end?
I took it scene by scene, moment by moment. I didn’t discover the architecture of the book until late in the process, when I found linkages between each section. I wrote Sam’s section first, then Paul’s, then Pax’s—not initially realizing Paul/Pax were the same person! Essentially, I wrote it as a series of novellas; I knew they would connect, had a vague notion about how they’d connect, but as I composed I pretended each was its own hermetic world. This helped me stay grounded in each particular reality. Then, after I had a draft, I was able see connections, to rearrange, and to write new scenes that bridged disparate parts. I still can’t believe it came together as it did. Sometimes it seems like sheer luck that it happened once, and utterly unrecreatable. I hope to do it again.

Did your masters degree in social work contribute in any way to the thrust of the novel or the characters’ insights?
Yes, for sure. I read lots of psychoanalytic theory (Freud, Melanie Klein, Winnicott) in graduate school, and I thought a lot about the psychological defenses guiding my characters’ behaviors. The working title of the novel was Split, in part because split means to leave, to run away—«let’s split this joint»—but also because, in psychoanalytic theory, the concept of splitting means disavowing unwanted parts, splitting the self, which is what many of my characters are doing. I wanted to look at their different ways of «splitting»—at their varying, sometimes bizarre, methods of escaping some part of themselves.
I worked as a therapist during the period I was writing the book, and as a therapist I learned to listen to my clients… to listen in a more full-hearted, radical way than I was used to doing. To sit in mysteries. To tolerate the experience of «not-knowing.» A client is telling his story, and you don’t know where it’s going, or what it means, not yet, and there’s this patience and curiosity you have to access in yourself, which is hard! Patience and curiosity don’t often go together, at least not for me.
As a writer, I think you have to do the exact same thing: listen carefully to characters, tolerate not-knowing. The novel, like therapeutic treatment, will take wrong turns, will sometimes go off course. There will be misunderstandings, empathic failures, uncomfortable insights. Writers, like therapists, need to listen to these mistakes, learn from them, wait, watch. Then create some kind of new reality.

What’s the worst and best advice you’ve ever gotten about writing a novel?
Here’s the best advice: I once was at a reading given by Salvatore Scibona, who published his astonishing novel The End after working on it for ten years. Someone in the audience asked how much of the first draft remained in the final. How many of its sentences original survived the chopping block? He said not a single sentence from the first draft appeared in the published manuscript. The audience (lots of writers) shifted uncomfortably. But then he said something I found heartening. That just because that old work didn’t make it into the final draft, doesn’t mean it didn’t deeply inform the final draft. It was all necessary. That first draft, he said, it’s like a chicken carcass. You don’t see the carcass in the soup on the table—but its flavor is everywhere.
I love this chicken carcass idea. It’s helping me write my second novel.

What’s your favorite thing that people tell you about Sweet Relief?
First and foremost, my favorite thing people tell me is that they read it. I always feel slightly astonished, bewildered: «You read my book? Really? Thank you!» I think I’ve made some people uncomfortable by lavishing weird gratitude on them when they mention simply reading it. But so few people read books, let alone non-linear, creepy-ish ones like mine. I’ve heard from many readers that it feels «unflinching.» That word comes up a lot, and I admit it makes me proud. I wanted not to flinch. I did, of course, often flinch: I put off writing hard scenes. I tinkered with sentences rather than forging ahead. I did all those things you do to skirt the real work. Because it’s hard to look straight at certain things that happen in the book. But I tried, in the end, to look at them directly and honestly, without sentimentalizing. And if the effect is one of unflichingess, if I’ve given the impression of a being willing to go to painful places without apology, without resorting to a soft focus treatment, I’m pleased. Also it makes me happy when people tell me it’s funny. There are funny parts, I think, and I hope the sadness doesn’t clobber them.

What are you working on now?
Another novel, still in the gestation period. A collection of essays about suburban adolescence. The first of these essays will appear in the fall issue of «AGNI». (It’s about being 16, ordering a pizza with some girlfriends, and then staging a bondage tableau [!] for the pizza man.)